The data submitted shows that London boroughs generated a total of 3,137 apprenticeships during the 2020-21 financial year, compared to 3,693 in 2019-20. This represents a 15 percent fall on the previous year.

Boroughs directly employed 1,505 apprentices, a 15 percent drop on the previous year when they employed 1,772 apprentices. However, this is still a historically high number for London boroughs. In 2017-18, the year that the apprenticeship levy was introduced, 1,146 apprenticeships were created internally.

471 apprentices were delivered in maintained schools, an 8 percent fall on the previous year. Again, this still represents an increase on the years before 2019-20. 289 apprenticeships were created in schools in 2017-18. 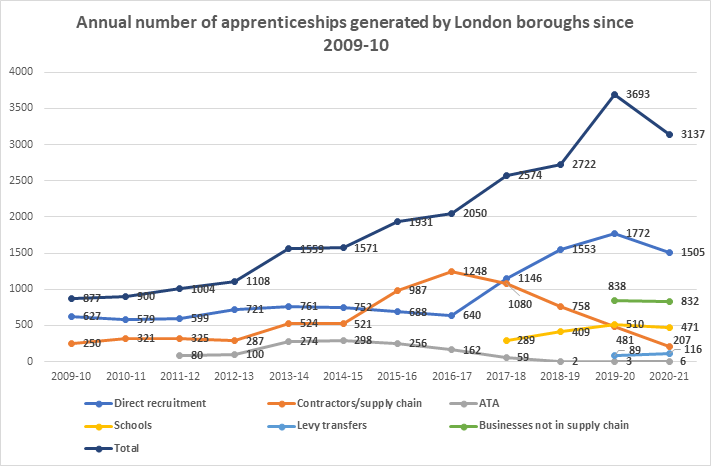 The number of apprenticeships created through contractors or in the supply chain has declined by 57 percent, from 481 to 207.

There was hardly any decline in the number of apprenticeships created through working with local businesses not in the supply chain (832 compared to 838 in 2019/20). However, a large proportion of these (74 percent) were generated by a single borough, Southwark.

Only six apprentices were employed through an ATA, and all of these starts were reported by a single borough.

The age of apprentices recruited within the council and in schools was reported in 91 percent of cases. The breakdown by age is as follows: 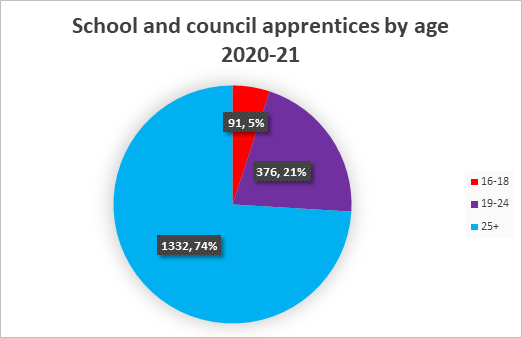 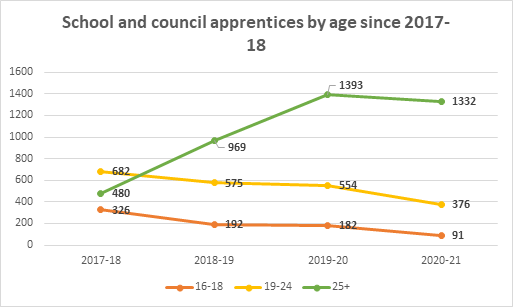 We also collected data on the level of study. his data was provided for around 95 percent of apprentices in councils and schools. The number reported at each level is as follows: 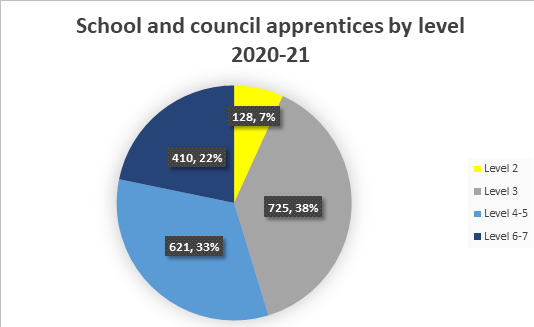 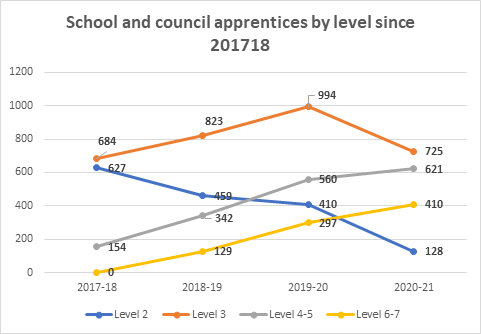 49 apprentices employed directly within the council were recorded as previously being NEET. This represents a fall from 182 in 2019-20. Just 9 boroughs were able to report NEET data this year.

64 percent of apprentices employed in the council or in schools were female, while 36 percent were male. The respective figures last year were 59 percent and 41 percent.

This is the second year that London Councils has asked for data on ethnicity in relation to apprentices in the council and in schools. Not all boroughs were able to supply data on ethnicity, and some were only able to supply partial data. In total, ethnicity was provided for 62 percent of apprentices directly employed by boroughs and by schools. This broke down as follows, with the ethnic make-up of London’s economically active population from the 2011 census in brackets: 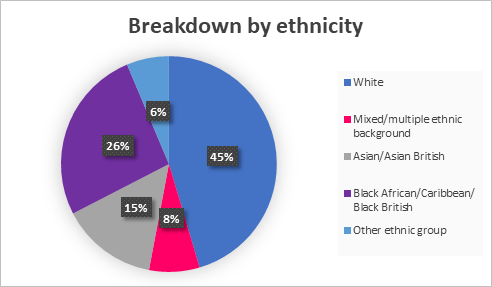 The proportion of apprentices classed as White or Asian/British is lower than the London-wide figure for the economically active, and higher for those classed as Mixed/multiple ethnic background, Black African/Caribbean/Black British and Other ethnic group.

84 apprentices, or 4 percent of the total number of apprentices delivered directly by boroughs and in schools, reported having a disability. This compares to 7 percent of London’s economically active population from the 2011 census.

The Public Sector Apprenticeship Target came into force from April 2017. Local authorities must have regard to the target of creating new apprenticeship starts equivalent to at least 2.3% of their staff. Four local authorities were able to meet or exceed the 2.3% target in 2020-21, down from six the previous year.

Headcount data is based on a combination of council headcount and schools where the local authority is the employer (community, voluntary-controlled, community special and maintained nursery schools) on 31 March 2020. This year, boroughs were asked to submit this data themselves.

Significant variance in headcount can be explained by the makeup of schools locally. For example, academies, voluntary-aided and independent schools are not subject to the borough’s apprenticeship levy. The makeup of local schools has a significant impact upon boroughs’ overall headcount and therefore their ability to meet the public sector target.

Collectively, London boroughs would have needed to create an additional 1,883 apprenticeships to meet the public sector target. The average performance against the target was an average of 1.18% compared to 1.41% the year before.