Climate change is the large-scale, long-term shift that we are seeing in the planet's weather patterns and average temperatures, and it has been driven by human activity that has released carbon dioxide and other greenhouse gases into the air. In October 2018, the Intergovernmental Panel on Climate Change published their report on reaching the 1.5°C aspiration set out in the Paris Agreement; that report highlighted for the first time the significant increase in damage to health, the environment and the economy of holding global temperatures below 2°C, instead of below 1.5°C.

In the UK, this was followed by the publication of the Committee on Climate Change’s report on, ‘Net Zero – the UK’s contribution to stopping global warming’, and in June 2019 the Government legislated to increase the national target for emissions reductions from 80% to net zero emissions by 2050. At the same time, we have seen significant levels of public concern and activism around this issue, including by groups such as Fridays for Future and Extinction Rebellion. In December 2020, the Committee published it's recommendations for the sixth carbon budget, and Government announced that it would target a 68% reduction in carbon emissions by 2030, as a new ambitious milestone to its 2050 net zero target.

28 boroughs and the Mayor of London passed 'climate emergency declarations'; across the country, more than 230 councils have declared a climate emergency, including the Local Government Association (LGA). In London, those boroughs that have not passed declarations are also considering a greater focus on climate change. The Chair of London Councils' Transport and Environment Committee, Mayor Philip Glanville, has written a December 2020 blog on why Londoners and their councils will be crucial in the fight against climate change.

London boroughs have adopted a variety of targets in respect of reducing council-generated emissions, though the majority have adopted a target of net zero emissions by 2030, which the Mayor of London has also now adopted. Some boroughs have also adopted emissions reduction targets for their borough as a whole. The following map shows London boroughs' targets for carbon emissions reductions from their own estate and operations:

Council own targets as at Sept 2021.png 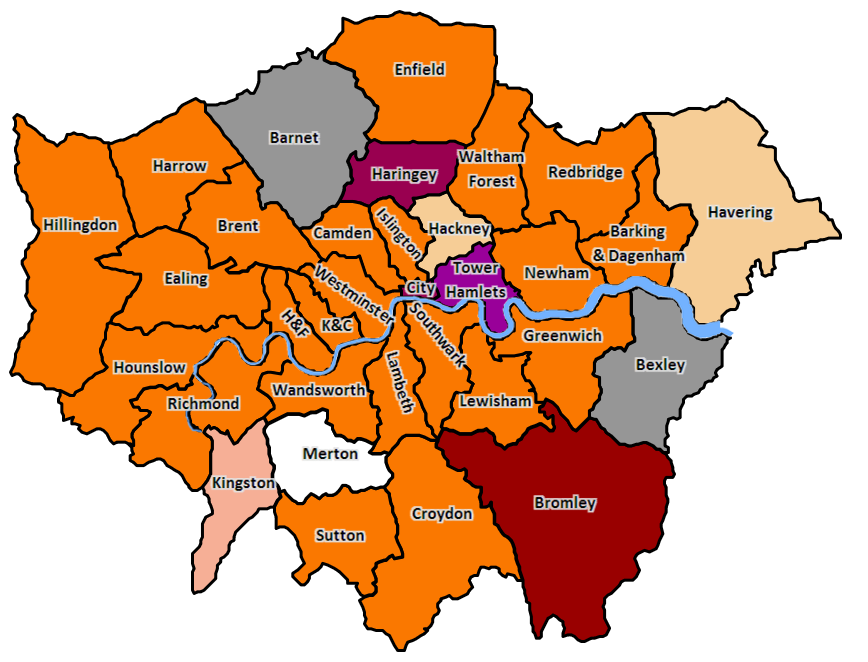 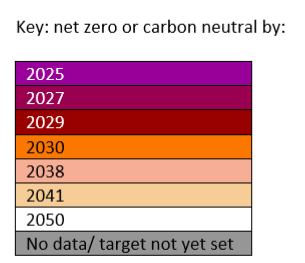 25 London boroughs have now published a Climate Action Plans detailing how they will seek to meet their targets, and all boroughs will be publishing one in due course.

Many of London's officer groups are actively looking at how they can support councils' emissions reduction targets, including the London Environment Directors' Network (LEDNet), who have established a climate 'cluster' to provide leadership on this issue, and the London Housing Directors' Network.

In November 2019, LEDNet and the Transport and Environment Committee (TEC) came together to discuss key climate change issues facing boroughs, and how they could work together to address them. The result was an ambitious Joint Statement on Climate Change, that sets out the boroughs approach to governance, citizen engagement and resourcing for climate change, as well as seven major programmes for cross-borough working. In 2020, TEC endorsed a lead borough or boroughs for each of these programmes, who will be responsible for overseeing implementation of the action plan for each area.

#1 Retrofit London: Retrofit all domestic and non-domestic buildings to an average level of EPC B. Lead borough: LB Enfield and LB Waltham Forest

In 2020, we established working groups to develop action plans for four of these ambitions - on domestic retrofitting, low carbon development, consumption emissions and a creating a resilient and green London. The working groups have hosted 22 thematic sessions involving around 100 borough officers, 10 GLA staff members and nearly 30 external presenters and experts, and these four actions plans will be finalised in the first half of this year. In other areas - low carbon transport, renewable energy and green economy - wider circumstances, including the response to Covid-19, have slowed our progress. However, we also aim to complete action plans for these programmes in 2021.

​Alongside these programmes, London Councils will be supporting the boroughs as they develop their borough-level climate action plans, including on projects around data, procurement and senior leadership training on climate change. We have already worked with LEDNet to design and deliver a suite of climate change capability training with Square Gain. The training is targeted at Directors and Councillors, but available to all London boroughs. Please contact Arafat Jalal ([email protected]) for more information.

London Councils will also be advocating on behalf of its members for the powers and resources that they need to deliver their climate ambitions. In 2020 and 2021, this included the following events, which you can watch again and/ or see the presentations on our website:

London Councils also works with partner organisations on climate change issues, and supports 'A Blueprint for Climate Action and a Green Recovery at the Local Level', together with the Local Govenrment Association (LGA), Green Alliance, ADEPT, Friends of the Earth, Greenpeace, the Gratham Institute, the Place-Based Climate Action Network, SOLACE and Ashden. We also suppor the Net Zero Strategy paper that was launched by the Blueprint at our event on 2nd July: 'Net Zero Strategy: how local govenrment can turbochage net zero delivery' (see above).

London's leaders have recognised that the recovery from Covid-19 must be a 'green recovery', and that we must not lose sight of boroughs' climate ambitions or the inequalities that have been exacerbated by the crisis. In July 2020, London Councils' Leaders' Committee agreed a suite of eight green recovery proposals, which have shaped our approach. In particular, we have worked closely with the GLA under the London Recovery Board - jointly Chaired by the Mayor of London and the Chair of London Councils - to shape and lead the Green New Deal mission and wider green recovery in the context of the aim of the Recovery Board: to ‘plan and oversee the capital’s wider economic and social long-term recovery, developing a strategy and plan of action to reshape London to be fairer, more equal, greener and more resilient than it was before the crisis.’

As part of this work, we have developed a £1.1 billion pipeline of borough projects aligned to the Green New Deal, which, with additional funding, could be scaled up or accelerated to support London's recovery from the pandemic.