Every year London Councils collects data from all London boroughs on:

For those apprentices employed directly by the borough and in schools, we also record information on the age, ethnicity, level of apprenticeship, the number of apprentices who were previously NEET and the number who have declared a disability.

This year London Councils asked for data relating to completions and progression for the first time. Boroughs were asked to submit data on the amount of apprenticeship levy available to them and the amount they were able to spend. This data was previously collected alongside the pay scales data in the autumn.

All 32 London boroughs and the City of London submitted returns.

The Covid-19 pandemic caused considerable disruption to the operations of local authorities during this period. It is therefore unsurprising that the data shows a drop in the number of apprenticeships created compared to the previous year.

Annual number of apprenticeships generated by London boroughs since 2009/10 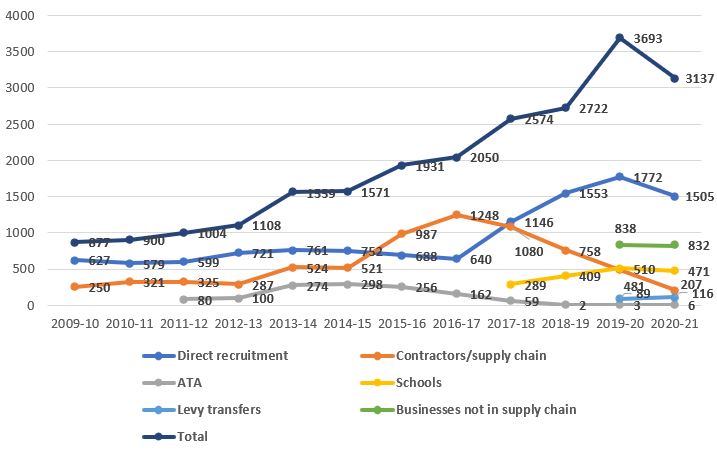 Age and levels of apprentices

School and council apprentices by age since 2017/18

Under the Public Sector Apprenticeship Target, which came into force in 2017, public sector bodies including local authorities must have regard to the target of creating new apprenticeship starts equivalent to at least 2.3% of their staff. Four local authorities were able to meet or exceed the 2.3% target in 2020-21, down from six the previous year. The average performance against the target was an average of 1.18% compared to 1.41% the year before.

Although there is still a significant underspend of the apprenticeship levy, this represents an increase on previous years. Last year’s survey found that boroughs spent 26 per cent of their levy and in the year before that the figure was just 13 per cent.

Boroughs reported having 404 completions of new apprentices and 175 completions of existing staff taking apprenticeships. These figures are considerably lower than the number of annual starts, which suggests that this data is not consistently kept on record or isn’t easily accessible.

All the data collected relates to a period when local authorities were dealing with the Covid-19 pandemic. For much of this period the economy was partly locked down, local authorities were dealing with the impact of the pandemic and home working was enforced. It is therefore unsurprising that the data reveals a reduction in apprenticeship starts. In this context it is impressive that the overall reduction was modest and that councils continued to generate apprenticeships. Furthermore, the proportion of the apprenticeship levy spent by boroughs has increased to 36 per cent, compared to just 13 per cent two years ago, which is a positive development.

However, the fall in the number of young people taking apprenticeships in boroughs is concerning, particularly in the context of the pandemic and the impact this has had on youth unemployment and education. Only 26 per cent of apprentices were under the age of 25 and just 29 per cent were new members of the workforce. It may be that the unique circumstances of the previous 12 months were the main reason for such low figures, however it continues a trend that dates back to the introduction of the apprenticeship levy and the replacement of apprenticeship frameworks with standards.

It is likely that the withdrawal of frameworks has meant that there are fewer apprenticeship opportunities available for young people entering the workforce, particularly at Level 2. Meanwhile, the growth in higher level standards, accompanied by the availability of the levy, has led to a year-on-year increase in the number of existing staff members taking apprenticeships at higher levels. This in itself is not a bad thing, but it is concerning if it is coming at the expense of younger apprentices entering the workforce.

London Councils is in the process of working with boroughs to understand these trends in more detail, with the aim of producing some practical recommendations for how boroughs can increase the number of young apprentices they recruit. With youth unemployment projected to grow further this year, it is vital that boroughs are creating apprenticeship opportunities for young people.

London Councils is also submitting a paper to government calling for reforms to the apprenticeship levy, which we have put together jointly with the GLA, the subregions and London business organisations. The paper calls for a number of flexibilities to be introduced to the levy, which would free up some of this funding to be spent on things like wages and pre-apprenticeship training. These changes would provide greater incentives to employers – including local authorities – to recruit more apprentices.

This is the first year that London Councils has collected data on completions and progression. The data submitted is useful, for example showing that 54 per cent of new apprentices went on to jobs in the council. However, not all boroughs were able to submit this data and most boroughs only returned

partial data, particularly in relation to existing members of staff. No data was provided for 17 per cent of completions relating to new apprentices, and it is unclear whether this is due to the data being unavailable or negative outcomes. We will work with boroughs to find out why this data is not widely available and what can be done to ensure that more boroughs are able to provide it in future years.