Illegal Tobacco - Let's Stamp IT Out

The sale and use of illegal tobacco is of concern to local authorities in London because of the serious severe health impacts, the link to organised crime and the loss of revenue funding to government.

Illegal tobacco products can be cigarettes or hand rolled tobacco smuggled duty free into the country. These fake or counterfeit, illegal products are considerably cheaper than legally sold products. Prices range from £3.50 to £7 per packet. The sale of single cigarettes or ‘singles’ is also illegal. 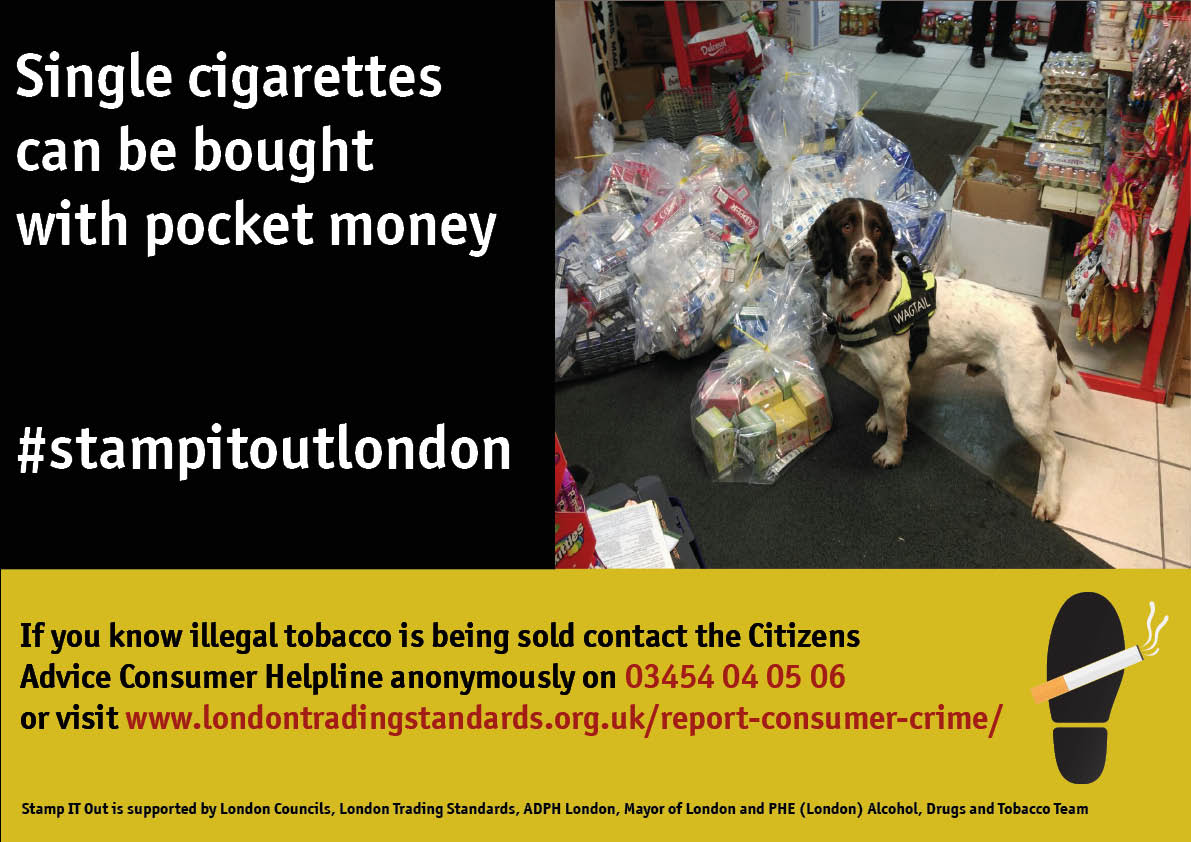 Illegal tobacco has been found in a range of shops across London, hidden in secret locations such as holes in the staircase, beneath shop floors, on back shelves, or hidden away in nearby parked vehicles. Private homes are also used to sell illegal tobacco in London as well as pubs, nail bars and cafes. Illegal tobacco is also sold on the street by illicit traders.

The warning from officials comes as the ‘Stamp IT Out London’ summer campaign against illegal tobacco gets underway, with Londoners urged to look out for illegal tobacco products and to report on the premises and individuals that sell it. The campaign, which is supported by London Councils, the Mayor of London, London Trading Standards, Public Health England London, the London Association of Directors of Public Health  London, and Action on Smoking and Health aims to make it less socially acceptable to buy and sell illegal tobacco.

A series of roadshows involving sniffer dogs, public health and trading standards officers, the Fire Brigade, stop smoking services and other partners will visit locations across London over the summer months, providing information to the public about the different types of illegal tobacco and the importance of stamping out the trade.

Signs to look out for

If you suspect illegal tobacco and or single cigarettes are being sold, contact the Citizens Advice Consumer Helpline 03454 04 05 06 or via the website www.londontradingstandards.org.uk/report-consumer-crime

Our podcast explains the topical issue of illegal tobacco and why it is important to address the impact of illegal tobacco on our health and within our communities.  It also sets out the London boroughs’ responses and action being taken to raise awareness in London.

In 2017 it was estimated that £117 million is made by criminals each year as a result of the sale of illegal tobacco in London.

The illegal tobacco campaign is now in its third year. London Councils – working with London Trading Standards, ADPH London, the Mayor of London and PHE (London) Alcohol, Drugs and Tobacco Team – is promoting the campaign to key stakeholders and the general public, alongside the crucial role played by individual London boroughs.

The aim of the roadshows is to raise awareness of the impact of illegal tobacco on local communities, to make it less socially acceptable to buy and sell these products, and increase reporting of it, ultimately reducing sale and distribution across London. This year the campaign has also broadened its aims to target retailers who continue to sell it by raising the perception of risk of getting caught.

For further details about the pan-London campaign and illegal tobacco issues, please contact

For queries specifically about communications for the campaign, contact [email protected]