London local authorities currently administer and deliver a range of both statutory and non-statutory welfare support.

London Councils believes that local authorities are best placed to identify the needs of their vulnerable and low-income residents and that locally administered support remains the most effective means of meeting those needs.

London Councils is developing a comprehensive local welfare support offer as part of its Pledges to Londoners – a series of shared commitments on the issues that matter most to Londoners, which it will deliver over the next three years.

The Future of Local Welfare 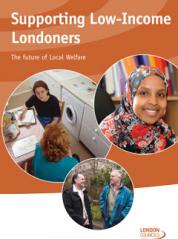 Supporting Low-Income Londoners: The Future of Local Welfare makes the case for giving boroughs a leading role in locally administered support as the most effective means of responding to residents’ welfare needs and moving from crisis management to prevention.

The report provides a summary of existing local welfare provision in London, including a selection of case studies of innovative approaches by boroughs, and highlights inconsistencies and inefficiencies in the current system that are holding back local authorities from supporting their low-income residents to the best of their ability. Drawing lessons from existing borough best practice, the report concludes with some recommendations for the future of local welfare.

With pressures continuing to grow on low-income Londoners due to welfare reform, housing costs and stunted wage growth, boroughs want the government to have a renewed focus on local solutions. The report warns that the current approach is overly centralised and undermines boroughs’ contribution to welfare provision.

What is local welfare?

London local authorities currently administer and deliver a range of both statutory and non-statutory welfare support on behalf the Department for Work and Pensions (DWP) and the Ministry of Housing, Communities and Local Government (MHCLG), including:

In April 2013, discretionary elements of the Social Fund were abolished. Funding for community care grants and crisis loans was transferred to upper-tier local authorities who were asked to set up local welfare provision schemes. Nine months after London boroughs began operating these schemes the government abolished the £178m annual funding from 2015-16.

The majority of London boroughs continue to operate LWA Schemes with money from their general fund and/or their Housing Revenue account. In total London boroughs provided £6.2 million for their LWA schemes in 2018/19. However, as funding pressures on local authorities continue to increase the long term sustainability of this approach is in question.

LCTS was established in 2013 when the government abolished the national Council Tax Benefit and instructed local authorities to establish their own local replacement schemes while reducing the funding by 10 per cent. The provision of a LCTS scheme is a statutory responsibility but the schemes can vary greatly. In London schemes range from closely mirroring the old Council Tax Benefit by providing 100 per cent support to charging up to 30 per cent of a household’s liability as a minimum payment. Many councils also offer exemptions to particularly vulnerable groups, ranging from lone parent with children under five to disabled claimants and households affected by the benefit cap.

DHPs are discretionary payments administered by local authorities that can be made to benefit claimants to provide additional support for housing costs. Where a resident is entitled to HB or support for housing costs as part of their UC claim but that support does not fully cover their rent they can apply for a DHP. DHPs existed before the start of the Government programme of welfare reform but funding for them was significantly increased in order that they could be used to mitigate some of the impacts from changes to Local Housing Allowance, the Removal of the Spare Room Subsidy and the Benefit Cap.